Looking Back on 89 Years 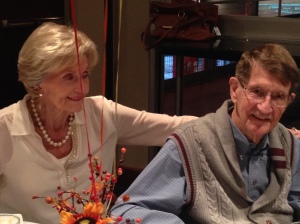 Bob and I at his 90th birthday party last October!

My birthday is later this month and I will be 89 years old. Since I first published my book THE DIRTY DAYS two years ago, many have asked me if I would go back and change anything about my life if I could. My answer is usually well, yes–but then again, maybe not. So many of the events that changed my life forever were never under my control. I was born the oldest child of a tenant farmer during one of the most difficult times in our country’s history. A great depression, the dust bowl, and then WWII. All of these events had a profound effect on who I was and would become.

As a result of our hard times, I learned the importance of friends and family (on whom we often relied), the necessity for resilience and tenacity (giving up was not an option), the need for charity and faith (someday things were going to get better–they just had to). My daddy and mother taught me integrity, the value of hard work, frugality, and pull-togetherness.

Do I wish my little baby sister had not died, causing my daddy to weep behind the house so no one would see him; or my mother seemingly lost and inconsolable over a tragic death that could have been prevented had we had the money to seek the best medical help possible? Do I wish I could have had store-bought dresses to wear and bakery-bread sandwiches to eat? Do I wish I could have had enough to eat–so often I went to bed hungry, yet never told my folks. Yes, yes, yes, and yes!

What I did have was a close-knit family that worked together, played together, grieved together, and stayed together. There’s no question I grew up with more hardship than I’m fond of remembering, but I also grew up in a house filled with love, courage, and hope. Would I ever want to change that–of course not!

Just some observations from a woman who has lived 89 years–and I’m looking forward to stacking up my 9th decade!

Since I only briefly mentioned my mother’s quilt making and her creative money-saving cooking in my book THE DIRTY DAYS, I would like to share a little more information about these two endeavors. First, I’ll comment on denim quilts in this April 15th post, and in my May 1st post, I’ll share my thoughts about her Vinegar Pie. Both writings, I believe, are examples of women’s self-reliance in the 1930s.

Mothers of the Great Depression, especially those in the 1930s Dust Bowl, were often artistically ahead of their times. For instance, when I was a teen in the late 1930s I thought my mother was rather cool when she saved the relatively new-looking backs of the legs of my father’s and brothers’ worn-out blue denim bib overalls to use in her quilt-making.

She also saved scraps of the flour sack floral print material left over after she made me or my sister a dress. She would creatively incorporate the colorful floral pieces with the denim pieces. The contrast of the two materials made a strikingly attractive quilt.  I noticed that my friends’ mothers also recycled coarse blue denim overalls material and gave it and the pretty print flour sack scraps a second life in the creation of their quilts.

I like to think the denim overalls material symbolizes the men’s persevering labor and the flour sack print speaks for the roll women played in the family’s survival of the 1930s hard times.

In retrospect, there was nothing backwoods about a quilt made of squares and triangles of faded denim overalls material interspaced between pieces of floral flour sack prints.

Today, in boutiques, department stores and trendy mail-order catalogs one can find numerous items made of denim with floral print trim, beads, embroidery, and any number of innovative and funky decor adorning all sorts of jackets, skirts, purses and home decorations. Yes, those artistic, quilt-making mothers of the 1930s were decades ahead of their times!

Poor farm women during the 1930s Great Depression didn’t have much time or money for sewing clothing. Time was especially precious to the women of the Dust Bowl because there was almost constant dirt causing problems or requiring their attention. Without enough water, or any modern conveniences, cleaning chores were tediously planned and performed. Scraping together enough ingredients to make a meal took time to execute, as well.

But those cited examples are only the tip of the iceberg as far as demonstrating Dust Bowl women’s resourcefulness and self-reliance. For sure, there wasn’t much time for flexibility in their routine. And finding time to make a garment demanded extraordinary flexibility.

Traditionally, a woman’s time with a needle would have been spent in mending, or altering their children’s old clothing, or making quilts. And any cash in pocket was slated mostly for costs of running the farm, a few food staples such as flour, or very possibly for shoe repair. Often a significant amount of money would be needed to pay the doctor for delivering the next baby.

So it was a godsend when the flourmills began to package flour in cotton sacks made of attractive floral print material. The women took a liking to that immediately. So, since my mother and most of the other moms who lived in the Dust Bowl during the Great Depression were also frugal women, they saved the print materials from flour sacks to sew dresses for their daughters.

Dress patterns were an extra expense, and the women often designed their daughter’s dresses by changing some of the detailing of an old or borrowed pattern. They also made the dresses with extra-wide hems, and when it came time to lengthen the skirt, my mother and some of the other moms sewed a narrow, bright colored trim, or lace, on the faded line where the old hemline once was.

The old saying Where there’s a will, there’s a way surely fits my resourceful, self-reliant Mother and the many others like her in the Dust Bowl and throughout our nation during one of our most historically difficult times.

For more information about those times, see my book THE DIRTY DAYS.